Structure of the national education system in Germany 2011/12

In addition to the division of responsibilities described above, the Basic Law also provides for particular forms of cooperation between the Federation and the Federal States within the scope of the so-called joint tasks (Gemeinschaftsaufgaben).

Early childhood education and care is not part of the state-organised school system in Germany but almost exclusively assigned to the child and youth welfare sector. On the federal level, within the framework of public welfare responsibility lies with the Federal Ministry for Family Affairs, Senior Citizens, Women and Youth (Bundesministerium für Familie, Senioren, Frauen und Jugend – BMFSFJ), on the level of the Federal States, the Ministries of Youth and Social Affairs and, in part, also the Ministries of Education and Cultural Affairs, are the competent authorities.

As a rule, in the year in which children reach the age of six, they are obliged to attend primary school. All pupils in Germany enter the primary school (Grundschule) which in almost all Federal States covers grades 1 to 4. Following the primary school stage, secondary education in the Federal States is characterised by division into the various educational paths with their respective leaving certificates and qualifications for which different school types are responsible. Once pupils have completed compulsory schooling they move into upper secondary education. The range of courses on offer includes full-time general education and vocational schools, as well as vocational training within the dual system (duales System) The tertiary sector encompasses institutions of higher education and other establishments that offer study courses qualifying for entry into a profession to students who have completed the upper secondary level and obtained a higher education entrance qualification. As part of lifelong learning, continuing education is assuming greater importance and is increasingly becoming a field of education in its own right. In response to the vast range of demands made on continuing education, a differentiated structure has been developed.

Eurypedia provides comprehensive and comparable information on the German education system. Further information may be found on the websites of the Secretariat of the Standing Conference of the Ministers of Education and Cultural Affairs of the Federal States in the Federal Republic of Germany (Ständige Konferenz der Kultusminister der Länder in der Bundesrepublik Deutschland – KMK) and the Federal Ministry of Education and Research (Bundesministerium für Bildung und Forschung – BMBF).

For a brief description of the different levels of the German education system and related topics, please see the Eurydice National System Overview. 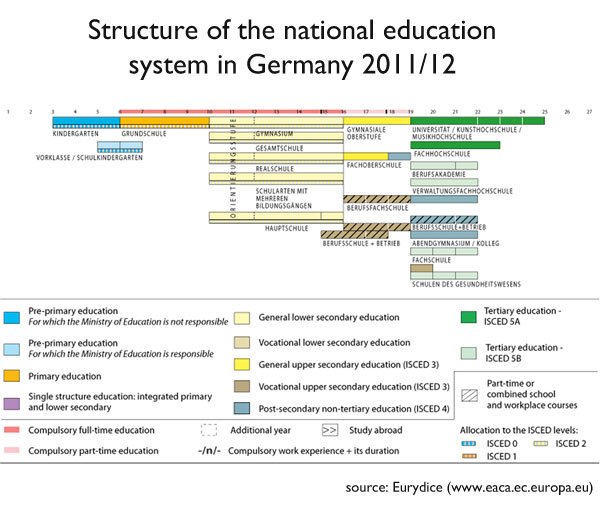